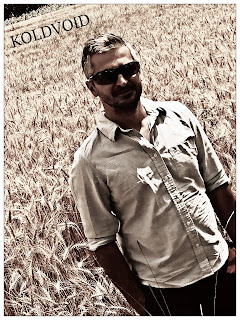 The very first interview I have ever done, so my skills at questioning may seem a little rusty at times, but hopefully this will give you an enjoying read about the life and thoughts of a great ambient musician. Many thanks to Robert for being such a good sport too.
- Questions -

1. I wish to talk to you about how Koldvoid came into existence first, what got you into ambient music?
Rob: I am not sure what got me into ambient music, I guess since the very early ages of my existance when I came in contact with music, besides rock music, I got an injection of meditative stuff like Pink Floyd, Vangelis, Jean Michel Jarre, than later in early 90s Angelo Badalamenti, Dead Can Dance, Ennio Morricone. I also have grown an attraction for movie soundtracks. All these influences made me experimenting with sounds and textures which years later, in 2008 culminated in the ambition of recording and releasing this style of introspective music under the name of KOLDVOID. I had hours of recordings earlier, but only by the year 2008 I could finally put up all the puzzles from my head and start making it more serious, if I can say so.

2. You have certainly evolved your sound since your first release Touching the Void, is this evolution from acquiring new equipment, or from new ideas?

Rob: Both of them. I was/am always searching for new methods of writing and recording, but I also bought new instruments.
3. Can you give the readers some insight into how you record your music?
Rob: Most of the times I am trying to catch on synth, or piano or on any other instrument a melody I have in my head. This is why KoldVoid is more musical and less noisy than other ambient/industrial music I guess. I try to catch a mood and melody on acoustic guitar, or a piano, this is from where the songs always starts. I use also a metronome or a basic drum, which later I remove from the mix, just to keep up the tempo. After the main melody and chords are recorded, then comes the other instruments, which colours it all up, then I mix it and there you have it. Sometimes I also use also field recordings, sometimes I sample monologues/dialogues from movies, to make it more interesting.
4. Are there any outside inspirations other than music (such as urban life or nature) which help shape your music?
Rob I think music is just one of the inspiration channels. I never start to record something just because I heard an album I like. Most of the times I record after longer periods of non-creative times. Both nature and urban life is an inspiration, some people said that KoldVoid is somewhere on the border between urban feeling and nature. I live almost in the forest, near the city, so there you are...it might be true.
5. I wish to talk to you about how you feel about the Dark Ambient genre as a whole. What do you think defines it as a genre, or, do you feel that it covers a range of unusual but similar styles of music?
Rob:

6. Are you satisfied with how the genre is received in the public? How is your own project received?
Rob: Depends on what do you think by "received". I think dark ambient is exactly where it should be. Underground. The biggest names like Lustmord, Raison D'etre, etc, can hardly sell more than 2000-3000 copies of their albums, so that's the economical fact. You can go whatever country you want and you will not see more than 200-300 individuals at a Dark ambient show, or festival, but that’s OK for me. I make music as self-therapy, some people buy the releases, that’s all, it’s enough for me. Koldvoid got for more than 90% only good and very good reviews, I never read actually one really negative one, so I guess the dark ambient underground likes it.
7. What is in store for the future of Koldvoid?
Rob: I am currently writing and recording a new album, which may appear in 2014, we'll see.  The working title is "Complete Annihilation of Joy". It will be more electronical and more experimental, but with "real" songs, not only textures...I am trying to find also people to work on some videos. Not much besides this.
8. Any finishing words for the readers?
Rob: Thank you James for the opportunity and the interesting questions. May the Dark lights be with you!

Country - Sweden
Composer - Martin Stig Andersen
Released - July 2011
- Tracklist -
1. Menu
2. Boy's Fort
3. City
4. Rotating Room
5. Sister
6. Gravity Jump
- Review -
Limbo is one of the most beautiful games released, giving side-scrolling puzzle game with surreal minimalist design (I urge you to play it). And if you have played it already, you may or may not have noticed the music. The reason you may have not even known there was music is because it blends so well into the atmosphere of the game.
This is another one of my favourite albums, really professional Ambience all throughout, from the less-is-more approach on 'Menu' and 'Gravity Jump' to the industrial tinged 'Boy's Fort' and even the completely terrifying 'Rotating Room'. What makes this even more surprising is none of this music is really digital at all, most of it being composed through analogue instruments and equipment, giving it a much cleaner, much more earthy appeal than Martins digital counterparts.
Limbo relies very heavily on the atmosphere created within the game, and would not exist as it does without Martins contribution. It is equal the other way around too, as the music co-exists with the game, and is actually a reaction to certain points in the game. So neither could exist without the other, however the soundtrack only still sounds so special.
This is an album everyone should get, the atmosphere feels so right, so real, this is beyond just Dark Ambient, there is no words for this music, this amazing listening experience. Even if you don't want the full album, I urge you to at least get the song 'Menu', which is definitely close to being my favourite Ambient song ever.﻿
Posted by Unknown at 02:01 No comments:

Country - Poland
Composer - Arthur Burns (A.K.A RH-), ky, Harley Lethalm (A.K.A Dhampyr)
Released - November 2012
- Tracklist -
1. Intro
2. Syreny
3. Tam,Gdzie Martwe statki Jęczą...
4. Nieskończone Morze
5. Głębiny
6. Nadejście Zimowych Chmur
- Review -
The very first Deep-pression song I heard was "Grim Reapers Hand" from the split with Koldvoid, and I immediately loved it, and the piece has become one of my favourite Ambient tracks. So I have decided to review DP's newest full length album, released for free as Nieskończone Morze, or bought from Valse Sinistre records as Vegtelen Tenger.
Both names relate to the idea of an infinite sea, an ocean stretching for miles out to the horizon. And DP has been able to convey this image quite well through their music. Lush soundpads mixed with ominous guitar work, topped off with whispered vocals in the local language. It is quite drawn out and does not rush at all, instead keeping a slow steady pace and holds a calm atmosphere, much like the theme. Of course being stuck in an endless sea can be quite boring, and at some times the same can be said for the music.
The music does what it does best, convey a vivid melancholic image, and whilst it can get a little monotonous at times (which I guess is a trait in this genre), it can still carry the listener into another world, and then drop them into the middle of a freezing ocean.
﻿
Posted by Unknown at 01:39 No comments:

Country - Poland
Composer - Grzegorz Bojanek
Released - July 2013
- Tracklist -
1. We Are All Red Green and Blue
2. Three is Enough
3. My Mind Between the Walls
4. That Day Remained in my Mind
5. All Four Seasons﻿
6. Alone
7. One Hot Day
8. Garbage
9. Drops
10. My Garden
11. Listening to Birds
12. Warm Autumn
13. Violet World
- Reveiw -
Another one of those gems found whilst wondering the ever evolving fields of Bandcamp, Grzegorz Bojanek has given us not only a solid ambient release with Constraints, but also a conceptual artpiece in itself, just from how this noise is given to us.
I won't into too much detail about the sound given here, it would take forever, but Grzegorz has included some familiar sounds, field recordings simply from around home, and it gives such a warm sense that this noise can be made from simple objects. It lets the album breath easily, given its DIY style, not to be wrought through the professional studio wringer. This album is still beautifully produced don't get me wrong, but it the production is not overdone, so that it sounds artificial.
There are of course sweeping synth and orchestral elements to go with the noise, and again this is not overdone either, rather giving the music a polished edge, and sometimes you may not even be able to hear this. Now Grzegorz could have just stopped here and given us a great album, but what stands out for me on this release is the acoustic work, this just gives the music a whole new level of atmosphere, catapulting it into ethereal, almost dream-inducing atmosphere.
This album could be an incarnation of harmony, as all elements play equal roles, and would not work at all if one was lower or missing.
Favourite songs include 'Three is Enough' because of it's melancholic chime work, and 'Listening to Birds' for, like I said before, flawless acoustics.
Posted by Unknown at 01:26 No comments: